Four of the craziest fish on the Great Barrier Reef 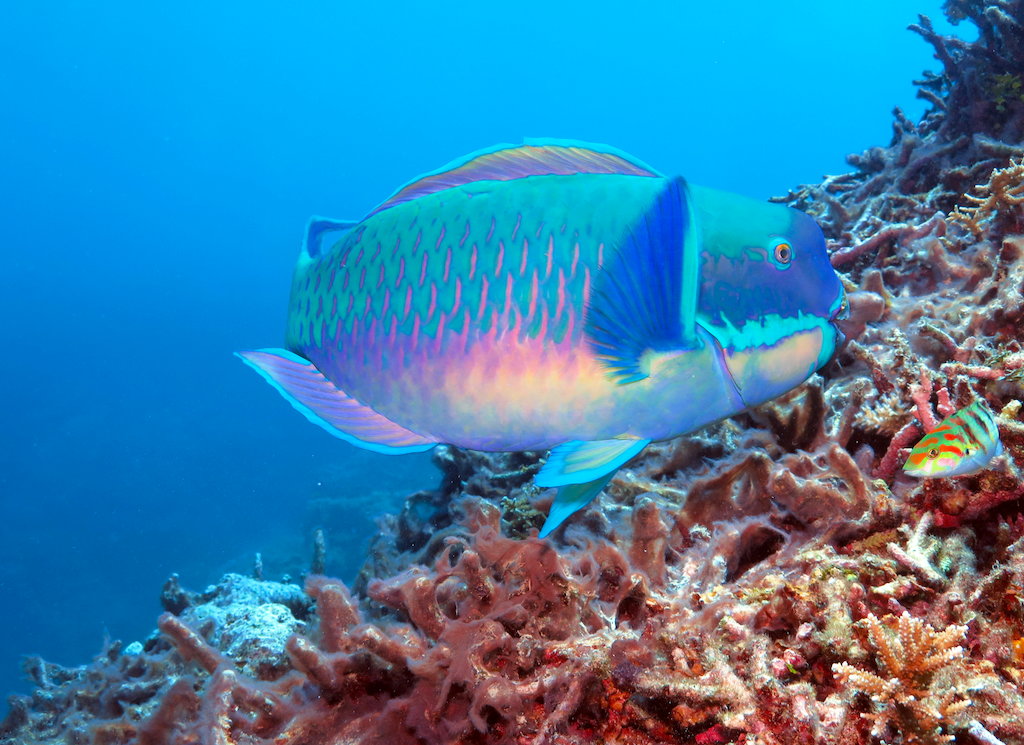 Usually Pearl fish live alone inside the vessel they choose (although it is not uncommon for pairs to enter and have sex inside the cucumber), however in 1977, a New Zealand Biologist named Victor Benno Meyer-Rochow recorded 15 Pearl fish sharing the same habitat (the anus of a single sea cucumber).

The brightly coloured Parrot fish is vital to the health of reef systems across the world, including The Great Barrier Reef. The Parrot fish acts as a natural cleaner of parasites, limestone and algae helping to maintain a thriving reef environment. While feeding/ cleaning, they ingest large amounts of coral and algae covered rocks, which they digest and then excrete as sand which later goes on to form coral cays and islands.  Amazingly, around 30% of the sand we see is parrotfish poo! Some of the larger parrotfish can produce up to 90kgs of sand each year!

Additionally interesting about the Parrot fish is the way it protects itself from predators at night. Some species of Parrotfish create a mucus cocoon or bubble to protect themselves from predators and parasites. The cocoon acts almost like a cloaking device, making them invisible to any fish or predator that might swim their way.

The Damsel fish is known to be a small but dominant and aggressive species, part of the anemone family. One breed in particular, the Cortez Damselfish is known to be especially aggressive, especially at the time of clutches or eggs being laid. It is during this period that the male Cortez Damselfish is known to partake in filial cannibalism (meaning that it engages in the cannibalism in part/full of their own offspring). This is an adaptation by the male Damselfish to avoid the stress of dealing with offspring that do not deserve or warrant the cost of prenatal care. It is estimated that a male Damselfish will typically eat roughly 25% of its clutches.

Cleaner Wrasse are important to the overall health of the ecosystem, working to clean the parasites, dead scales and mucus off fish, sharks and turtles that present themselves for cleaning. This is a relationship where both parties benefit; the Wrasse gets a feed and the animal being cleaned remains healthy. It has been noted that the size, diversity and overall health of marine animals is greater in reef systems where Cleaner Wrasse are both present and active. It is estimated that when Wrasse are absent, resident fish are up to 37% less abundant than if the Wrasse are present. That is a big difference, and demonstrates the importance of the Cleaner Wrasse on The Great Barrier Reef.