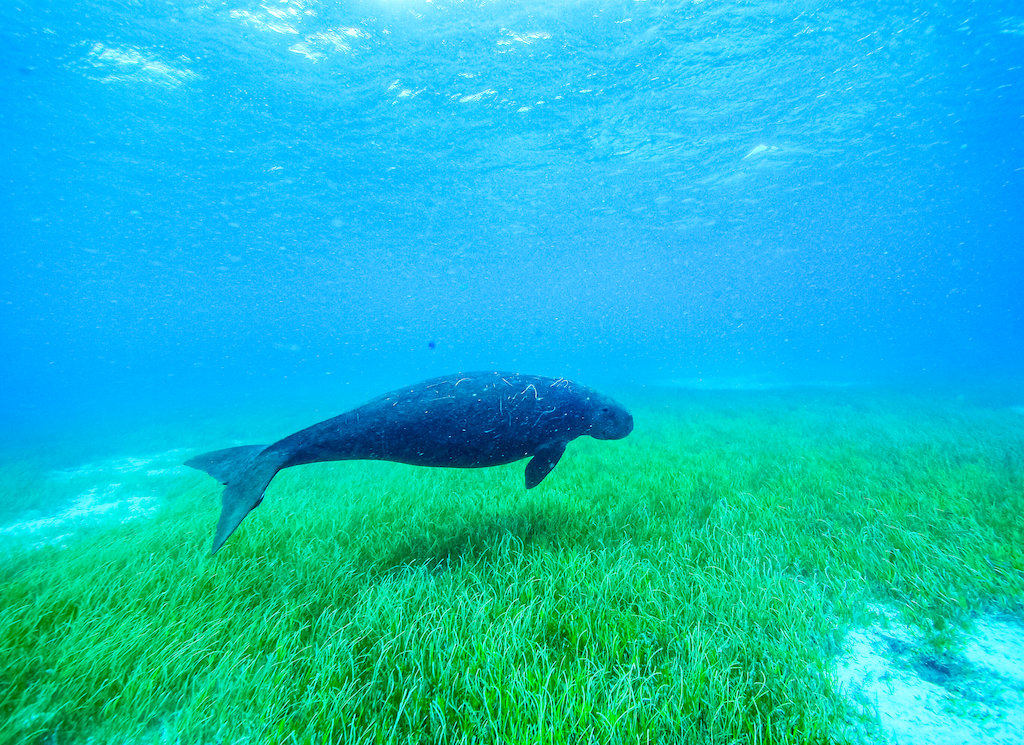 A group of very excited scuba divers with Great Adventures Cruises at Green Island were treated to a rare encounter with a young adult dugong yesterday.

Estimated to be around 2 metres in length, this was the first dugong sighting recorded by Great Adventures divers at Green Island in several years. It was also the first ever sighting for videographer Dan (DD) Liu and two very lucky introductory divers on holiday from Ballarat Victoria.

“It was so exciting to see! He was very curious swimming near us as the group were diving on a nearby coral bommie. He came close within about 4 metres, swimming away and then coming back for another look before swimming off over the seagrass beds,” said DD Liu.

Dugongs, often called sea cows, as they graze shallow seagrass meadows (eating up to 40kg a day!) are found across the tropical belt in Australia. They reach a length of 3 metres, live up to 70 years of age and can weigh as much as 400kg.

“Dugongs are fascinating mammals, sharing a common ancestor with elephants, and early sailors are believed to have confused them for mythical mermaids,” said Quicksilver Group Environment Compliance Manager, Doug Baird.

“They are most closely related to the manatee, their northern hemisphere relative. They resemble a large dolphin but lack a dorsal fin and have an upper lip covered in thick bristles.  They are well designed for aquatic life, with nostrils situated on top of their heads so they can breathe, and have a large, strong tail that propels them through the water. Their eyes and ears are on the side of their heads. Although their eyesight is poor, they have an acute sense of hearing.”

Dugong are threatened on a worldwide scale and in Australia, are a protected species under various legislation including the Great Barrier Reef Marine Park Act 1975.

This important sighting will be reported to GBRMPA’s Eye on the Reef monitoring program contributing valuable information about these endangered creatures as well as the long-term protection and management of the reef.